Toyota teams up with LEGO to build a drivable, life-size model GR Supra 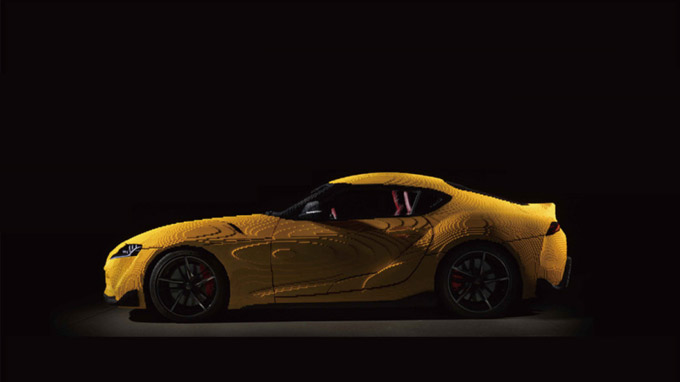 Toyota is celebrating the 35th anniversary of the iconic Supra nameplate by showcasing a life-size incarnation of the current-generation model built from more than 477 000 LEGO blocks. Weighing an astonishing 1 885kg (390kg heavier than the road-going vehicle), it took the team of 21 builders and two mechanics – who worked 24 hours a day in three shifts – a total of 5 400 hours to assemble the LEGO Supra.

Although its mainly built from blocks, the car also incorporates a steering wheel, tyres, driving seat and car factory logo – all derived from the original vehicle – while the interior remains largely plastic. While it doesn’t feature the GR Supra’s turbocharged inline six-cylinder engine, the LEGO replica is drivable, with an electric engine capable of reaching a top speed of 28km/h.

The LEGO Supra sports a vibrant shade of yellow and has functioning headlights and taillights and is on display at Legoland in Nagoya, Japan, until 11 October 2021. Thereafter, it has been reported that the life-size LEGO Supra will be exhibited at the Japanese Super GT racing series.

The good news for all the other Supra aficionados, model car collectors and LEGO enthusiasts is that TSAM is giving away 35 LEGO Speed Champions Toyota GR Supra replicas. If you would like to win one of these collectable 76901 LEGO GR Supra kits (with 299 pieces), please go to TGRSA.co.za for competition details.