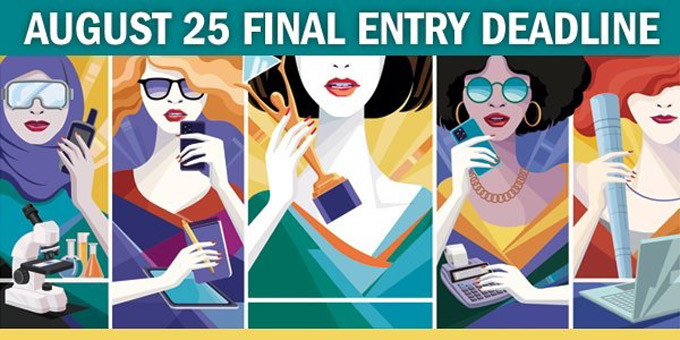 All Female Entrepreneurs, Executives, and Employees Worldwide May Submit Nominations Through August 25

The Stevie® Awards, organizer of the world’s premier business awards programs, is accepting final nominations its 2021 (18th annual) Stevie Awards for Women in Business program through August 25. Entries will not be accepted past this deadline. Entry kits and complete details on the competition are available at www.StevieAwards.com/Women

The Stevie Awards for Women in Business honor the achievements of working women in more than 100 categories, including Entrepreneur of the Year, Executive of the Year, Mentor or Coach of the Year, Lifetime Achievement Award, Achievement in Equal Pay, Women Helping Women, Employee of the Year, Woman-Owned or -Run Company of the Year and Innovator of the Year. All female entrepreneurs, executives, employees, and the organizations they run, worldwide, are eligible to be nominated.

New categories this year include Most Innovative Woman of the Year in Accounting and Healthcare, Mentor or Coach of the Year - Consumer, Women Helping Women - Social Change, Social Change Maker of the Year, and many more.

Stevie Awards President Maggie Gallagher says “We are excited to welcome the final round of nominees this year. The judges are already impressed with the body of work submitted by female entrepreneurs, executives, employees, mentors, and more. We encourage anyone who is considering nominating for the Stevie Awards for Women in Business to create their entry account at www.StevieAwards.com/Women.”

The 2021 Stevie Awards for Women in Business will be judged by more than 200 leading professionals around the world, and nominees will have access to all the judges’ comments and suggestions about their nominations.