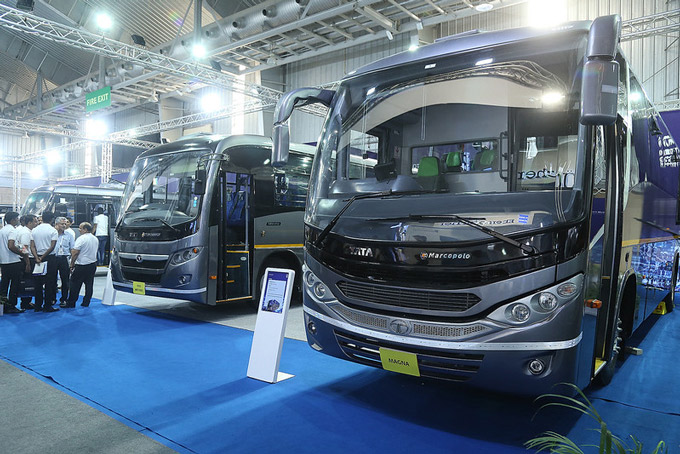 To catalyse business reconnection and offer new sourcing opportunities to the bus and coach fraternity, Busworld International CVBA and Messe Frankfurt India have announced that the ninth edition of Busworld India will be held from 25 – 27 August 2022 in Bengaluru.

The public transportation segment saw a major slowdown during the pandemic as bus ridership and service levels were severely impacted and public transport operators were strained due to lack of revenue. With things slowly getting back to normal over the past few months, public transportation is gradually starting to recover and the stakeholders of bus and coach industry are looking forward to make a strong comeback in the market.

Analysing the shift in mobility trends over the last three months, the ‘COVID-19 Community Mobility Report’ released by Google indicates a steady revival of public transport hubs, including bus and train stations in India. According to the report, the public transportation has recovered to -9% and is expected to revert to the pre-COVID levels in the coming months.

India’s leading trade fair for the bus and coach industry, Busworld India 2022 will open its doors from 25 – 27 August 2022 in Bengaluru, bringing new sourcing and networking opportunities on its show floors.

“The year 2020 and the beginning of the year 2021 has been a tough one for the industry with lots of uncertainty and sluggishness marring the supply chain. However, the signs of recovery in bus transportation in these past few months have brought back the spark among bus manufacturers and sellers. Through Busworld India 2022, we aim to strongly contribute in the industry’s revival and bring crucial and invaluable business opportunities to the industry players across India and worldwide,” states in a joint statement issued by the trade show’s organisers.

Even during the slowdown last year, Busworld India continued to keep the industry connected and updated through a series of virtual webinars and knowledge sessions.

During a recent webinar on "Restoring bus in public transport through collaboration between Asian cities and the bus industry" hosted by Busworld India, Mr Prasanna Patwardhan, President, Bus & Car Operators Confederation of India (BOCI), urged the government to support STUs and private bus operator alike to increase the public preference toward buses: “The government should completely open up luxury services by buses to private sector and let State Transport Undertakings (STUs) compete with private operators on quality of services. All STU bus stations need to be modernised and private operators should be allowed to operate from the same stations, on similar lines like airports, and open government lands can be made available for bus parking at a nominal cost.”

“Integrated land use, transport planning, transport mode integration and use of high-occupancy vehicles can majorly help in reducing the traffic congestion level in the country. Additionally, setting up of dedicated bus lanes along with a transit-priority traffic control system and use of state-of-the-art frontier technologies, like ITS and GPS can be implemented to optimise routes.”

The Indian government’s goal to add maximum electric buses on the road has given rise to huge opportunity for both vehicle manufacturers, as well as component suppliers and charging infrastructure suppliers. Mumbai’s local lifeline, BEST has recently received 25 brand new electric AC buses adding to its list of 206 existing e-buses, and plans to procure 115 more e-buses within the next two months. As per the sources, BEST will procure a total of 1,800 electric buses by mid-2023.

With new opportunities arising in the industry, Busworld India 2022 aims to be a crucial meeting point for industry decision makers, such as private and public bus and coach operators, vehicle manufacturers, component, accessory and software suppliers to reconnect and rebuild their value chain more strongly.