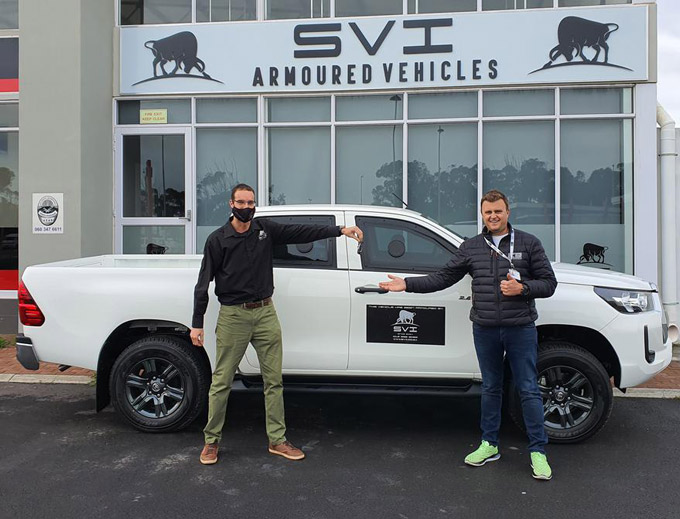 SVI Engineering, specialist manufacturer of armoured products, delivered its first vehicle only a week after the opening of its Cape Town branch. Well-known Bradford Wood of K9 Law Enforcement is the first customer of a B6 Stopgun V2.0 armoured Toyota Hilux double cab. This vehicle will assist him in fighting crime as part of his security business.

The security and mining industries are in need of a cost effective, B6 (assault rifles including AK47 and R1) armouring solution on commercial bakkies to be used as robust support or valuable-in-transit vehicles. SVI has recognised this need and developed the semi-discreet, B6 Stopgun V2.0 armouring solution replacing the widely used double-door system with integrated door armour including flat armoured glass fitted in window frames with the option of gunports This elegant solution provides similar ballistic protection but reduces the personal injury risk considerably compared with the double-door system.

A first for this armouring segment is a fully functional curtain airbag (when standard on the bakkie) to compliment the other standard safety systems of the vehicle. A single kit takes around four weeks to prepare and installation time is only three weeks.

The armouring kit is available on Ford Ranger and Toyota Hilux bakkies.