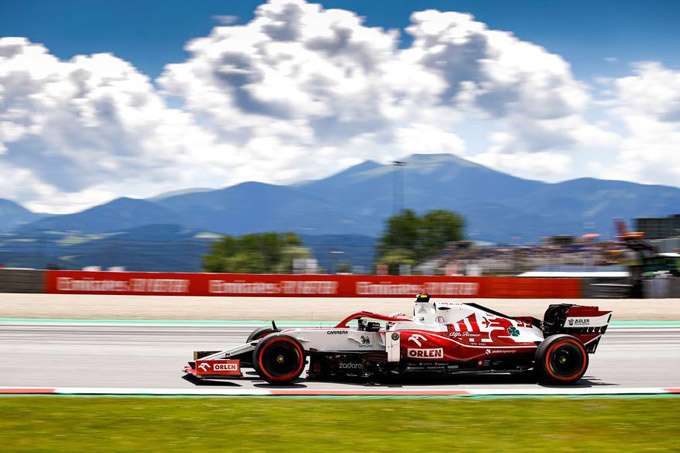 Alfa Romeo Racing ORLEN just missed out on the points in the Styrian Grand Prix, with Kimi Räikkönen nearly completing a memorable comeback as he raced from 18th to 11th, within sight of a point and just a few seconds down the road from eighth. Antonio Giovinazzi, driving the sister C41, crossed the line in P15, having had to recover from being turned into a spin by a rival on the first lap.

On another race with limited strategic options, with nearly everyone in the field opting for a one-stop strategy, it was pace that would make the differentiator. Both Alfa Romeo Racing ORLEN drivers made a good start, with Kimi making up five places from his starting position of 18th; unfortunately, contact between Leclerc and Gasly meant the AlphaTauri driver’s damaged car, with a puncture that would eventually cause retirement, was not able to avoid Antonio, who had taken evasive action on the outside. The resulting spin put the Italian at the back of the field, thankfully with no damage but with a big task on hand to extract anything from this race.

Kimi, starting on hard tyres, was able to extend his first stint, climbing up to sixth place as his rivals stopped for fresh tyres. He eventually visited the pits on lap 36, rejoining in 13th, one place behind Antonio, who had already swapped mediums for hards.

On fresher rubber, Kimi caught and passed his team-mate, before setting off in pursuit of Sebastian Vettel, eventually overtaking him for 11th with a clean, classy move at turn four. He then closed in on a train made up of Stroll, Alonso and Tsunoda, but ran out of laps before being able to make further inroads.

Antonio, who had to endure a much longer final stint than the cars around him, held his ground as long as he could, eventually having to concede some positions and crossing the line in 15th. While it’s disappointing to finish within touching distance of the points, the way this result matured is a demonstration of the fighting spirit of the team: Alfa Romeo Racing ORLEN was in the fight with the Alpines, Aston Martins and AlphaTauris from lights to flag, a result on which to build ahead of next week’s race in this same venue.

Frédéric Vasseur, Team Principal Alfa Romeo Racing ORLEN: “It was a battling race for all of us and a good job overall after a difficult Saturday. To finish just outside the points and less than five seconds from P8, starting from where we were, is a sign of a strong race but in the end we don’t have any points to show for it. I can’t fault anything in the way we raced today: the strategy calls were good, the drivers performed well and the car had good pace: we were in battles with all the teams around us from start to finish and we showed we had the pace to match them or be ahead of them. We’ll aim to build on this for next week and hopefully we’ll go one better and get back into the points.”

“Ten more laps and we probably could have scored a few good points, but unfortunately that wasn’t the case. I think we did the best we could today and achieved the best result from where we started: the strategy was right, we had good pace and the car felt good. I had a good start, some nice battles and passed a few cars in the process: in the end, it’s just the points that were missing. We will try to have a better Saturday next week and give ourselves a better chance for the race.”

“When you get spun around on the first lap and have to make your way back from last, it’s always going to be a difficult race. I had to push really hard at the beginning to catch up with the pack and this compromised us further: we tried to recover with an undercut with the hard tyres, but this left me exposed at the end of the race when I had no tyres left. Despite this, the race pace was not bad, as Kimi showed with P11. If next week we can have a good qualifying and keep out of trouble at turn one, we can hope to have a better result and bring home points.”