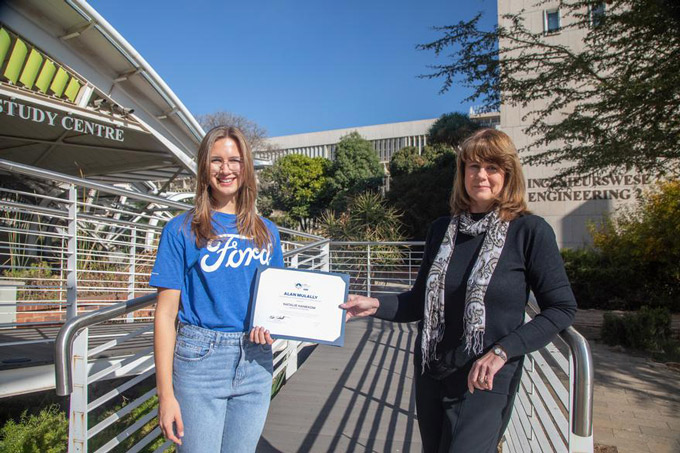 Ford Motor Company has recognised the promising talent of University of Pretoria student Natalie Hanekom by awarding her an Alan Mulally Leadership in Engineering Scholarship for 2021 – one of only 10 scholarships awarded globally each year, each valued at $10 000 (approximately R140 000).

Hanekom (19), is currently a second-year electronic engineering student in the university’s Department of Electrical, Electronic and Computer Engineering.

The Alan Mulally Leadership in Engineering Scholarship was established by Ford Motor Company to honour its former CEO’s outstanding service to the company during his tenure from 2006 to 2014. Prior to joining Ford, Mulally was revered as one of the aircraft industry’s leading engineers.

The scholarships are awarded to outstanding junior engineering students at 10 premier partner universities internationally. The applicants have to meet strict minimum requirements, including a combined average of 75-percent for all modules, and have leadership roles in academic or community-based initiatives. The winners are selected by representatives from the Ford Motor Company Fund, Ford Product Development and the company’s Human Resources Recruiting division.

“It is a fantastic achievement to have a South African student selected as one of the 10 Alan Mulally Leadership in Engineering Scholarship recipients awarded annually,” says Neale Hill, MD of Ford South Africa. “Promoting engineering is particularly important for South Africa due to our significant skills shortage in these crucial fields.

“Increasing the number of engineering graduates is essential to grow our economy, specifically in the manufacturing and automotive sectors, and reinforces our commitment to education as a means of empowering and uplifting the youth as our future pioneers and leaders,” Hill says. “Having this scholarship accessible to South African students is an important way of promoting interest in engineering, and rewarding excellence. We wish Natalie every success with her studies.”

The announcement coincides with Youth Month in June, which is dedicated to the South African youth of 1976 who fought for freedom and the right to equal education, and is celebrated annually on 16 June in honour of those who lost their lives during the Soweto uprising.

Along with supporting the funding for the winner’s university degree, the Alan Mulally scholarship connects recipients from around the world as part of the Ford family. They are connected with the Ford Blue Oval Scholars database, which allows the company to maintain an ongoing relationship with its winners.

“It is an honour to receive a scholarship that bears the name of such an influential leader as Alan Mulally,” says Hanekom. “It poses a challenge to anyone who receives it to do better and to do more with what they have. Having more means you can give more. As a student of electronic engineering, my goal is to collect as much knowledge as possible about the world and how it works so that I can have the tools I need to change it.

“Engineering is the field where we change, shape and really create the future. If engineers took the world from carriages to Ford Rangers in less than a century with barely anything to work from, just imagine where engineers can take the world in another century with what we have now,” she says.

Along with her academic prowess, Hanekom is also an accomplished athlete, as a track and field sprinter. She was part of the learner representative council in grade 12, and the captain of the girls’ athletics team. At university, she was the first-year class representative for 2020.

Alta van der Merwe, Deputy Dean of Engineering, Built Environment and Information Technology, adds: “The University of Pretoria is proud to be part of the Alan Mulally Leadership in Engineering Scholarship, and is thankful for Ford’s contribution towards future engineers. It is clear from Natalie’s excellent performance in school, and her exceptional first-year grades from 2020, that she has the grit and natural aptitude for science that will support her on the path to becoming an exceptional engineer.”