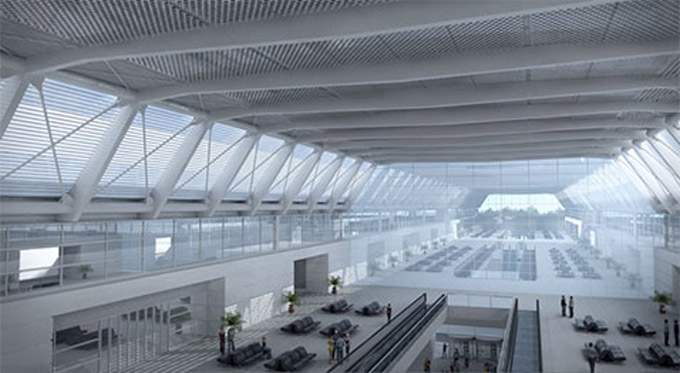 In April of this year, the Ministry of Commerce for the People’s Republic of China issued a circular which outlined their plans to turn Tianjin into a new hotspot for global exhibition business[1]. Earlier this month, the Tianjin Government approved the proposal for Tianjin’s national exhibition economic zone[2], which included the above objective in both the city’s and the region’s land use planning.

Tianjin is located in the centre of the Circum-Bohai Sea Economic Zone, bordering the Bohai Sea to the east. With its unique geographical advantages, the city is accessible from all directions, providing favourable conditions for business. The National Convention and Exhibition Center (Tianjin) is the third state-level exhibition complex to be established by the Ministry of Commerce in China after Guangzhou and Shanghai, making the Circum-Bohai Sea Economic Zone on a par with the development with the Greater Bay Area and the Yangtze River Delta. The exhibition centre, which spans 1.38 million sqm in scale, is equipped with 550,000 sqm of exhibition space and modern facilities such as a conference area, business centre, office building and hotel[3]. The complex will become a first-class exhibition centre for large-scale and international trade fairs in Northern China.

As a global player in the trade fair industry, Messe Frankfurt has close to 800 years of history and a strong global network that consists of 30 subsidiaries, as well as more than 50 sales partners serving around 190 countries and regions. The Group organises various trade fairs and events in industry sectors including: Mobility & Logistics, Textiles & Textile Technologies, Entertainment, Media & Creative Industries, Consumer Goods, and Technology.

Since stepping into Asia during the late 80’s, Messe Frankfurt has closely followed China’s national policies when establishing its trade fair business in the country. In recent years, the Group and its events have actively supported the new dual-circulation strategy by encouraging innovation and technology exchange, assisting Chinese firms to globalise and international companies to enter China’s market. Today, the company organises 42 trade fairs located in Greater China, including 38 fairs held since the beginning of 2020, attracting a total of 26,052 exhibitors and more than 1.2 million visitors. This includes Automechanika Shanghai, Intertextile Shanghai Apparel Fabrics, Guangzhou International Lighting Exhibition, Toy & Edu China, ISH China, Music China and more.

According to the new cooperation agreement, the Tianjin Commission of Commerce, Messe Frankfurt Asia Holdings and the National Convention & Exhibition Center (Tianjin) will become strategic partners and integrate resources to foster the development of Tianjin’s national exhibition economic zone. The parties will also work closely together to establish a world-class platform for exhibitions, conferences and events, and cooperate in terms of local and international marketing and promotion, exhibitor recruitment and training of exhibition personnel.

Mr Jason Cao, Assistant Managing Director, Messe Frankfurt Asia Holdings Ltd, is optimistic about the cooperation, stating: “The plan for coordinated development of the Jing-jin-ji (Beijing, Tianjin, Hebei) regional city cluster issued in 2015 has fuelled development in the area, and as a core city in the cluster, the success of Tianjin has been remarkable to see. As a market leader in the trade fair sector, we are thrilled to contribute to the development of Tianjin’s national exhibition economic zone using our global resources and expertise in the field. With the Government’s guidance, we are committed to bringing international trade fair platforms into the city that serve different industries, and to nurture a professional workforce in the region for the exhibition sector.”

AMR to be Messe Frankfurt’s first fair landing in Tianjin

Messe Frankfurt also announced that its first international trade fair to be held at the National Convention & Exhibition Center (Tianjin) will be the Auto Maintenance and Repair Expo (AMR), one of 40 plus trade fairs under the Group’s Mobility & Logistics cluster. Scheduled from 24 – 27 March 2022, AMR is expected to attract more than 1,000 overseas and local exhibitors showcasing their products to domestic and global industry players in the 100,000 sqm of exhibition space.

Responding to AMR’s relocation, Mr Wang Yanhua, Deputy Director General of China Foreign Trade Centre, and Vice President of National Convention & Exhibition Center (Tianjin) Co Ltd, remarked: “Relocating from Beijing, AMR is Messe Frankfurt’s first trade fair being held at the National Exhibition & Convention Centre (Tianjin), which is greatly significant to our strategic partnership. The cooperation supports the development of the Jing-jin-ji region and illustrates ways that the area is sharing trade and economic activities with the capital city. Moving forward, our fairground will uphold its market-oriented, open and collaborative operational philosophy through offering world-class trade fair services. We sincerely look forward to advancing our partnership with Messe Frankfurt where we can nurture more large-scale and professional branded exhibitions to deliver mutually beneficial results.”

While the Jing-jin-ji area has developed rapidly, Tianjin has established a complete automotive supply chain, from auto parts manufacturing to car making. As an influential industry platform serving China’s automotive aftermarket for nearly 40 years, AMR will take advantage of the strategic partnership to propel new business opportunities in the region. For more information about AMR, please visit www.amr-china.cn.

With the partnership sealed, the Tianjin Commission of Commerce, Messe Frankfurt Asia Holdings and the National Convention & Exhibition Center (Tianjin) will each utilise their own strengths, resources and infrastructure to bring more development opportunities into Tianjin, and extend these benefits to the Jing-jin-ji regional cluster, as well as the whole of Northern China.