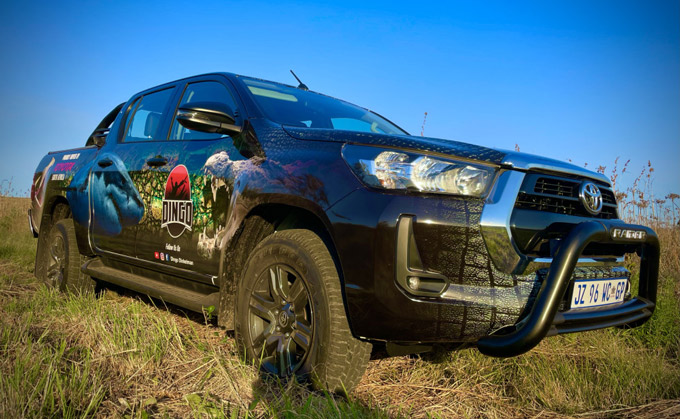 In South Africa, Toyota arguably offers the most front-row seats to wildlife enthusiasts than any other vehicle brand. The Land Cruiser 70-Series has become synonymous with unrivalled off-road reliability in the game viewing community while the Hilux adds a touch of sophistication and everyday utility.

Toyota South Africa Motors (TSAM) is therefore proud to announce that it is sponsoring wildlife conservation crusader and popular YouTuber Dingo Dinkelman with a Hilux Double Cab 2.4 GD6 4X4 AT. TSAM is currently partnering with a number of organisations that are championing conservation, including rhino anti-poaching and soil conservation initiatives.

According to Glenn Crompton, Vice President of Marketing at TSAM: “One of our primary goals at Toyota is to promote the sustainable utilisation of natural resources as well as living harmoniously with nature. We obviously cannot do everything on our own – hence we are partnering with knowledgeable and hands-on professionals such as Dingo. We believe that he is a perfect ambassador for the Hilux brand.”

Through Dingo Dinkelman’s YouTube channel, conservation efforts are being rewarded while mindsets towards wildlife are also being changed: “One of the most common responses we’ve received through our videos is people saying: ‘I was scared of animals, until I started watching these videos, and now I respect them’.

“They might not want to have these animals – such as snakes – in their homes or as their pets, but they respect them and their importance in the natural world. So now, rather than being indifferent or actively killing them, people will call someone to rescue them. This is a massive achievement for us.”

From safely removing puff adders, pythons and black mambas, to assisting in the dehorning of rhinos, relocating of hyenas and re-homing of trafficked pangolins – Dingo’s YouTube channel has come to both astound and engage audiences of all ages across the globe, bringing them that much closer to the inhabitants of the natural world.

The award-winning Discovery Channel wildlife presenter says for him, the important thing is “connecting people, especially those without a prior connection, to animals.”