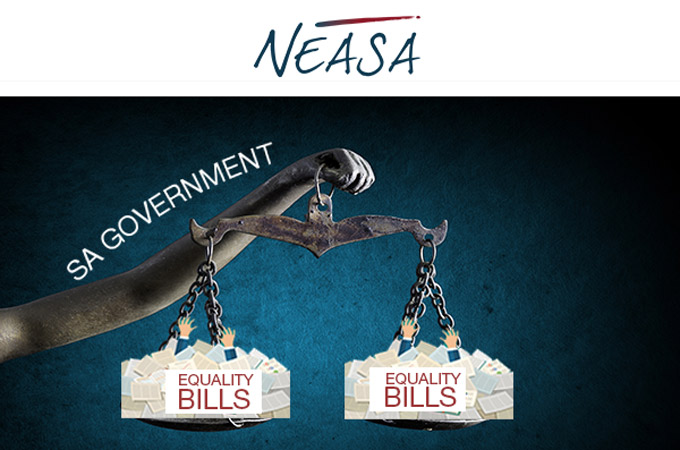 On 26 March 2021, the Department of Justice and Constitutional Development published an invitation for public comment on the Amendment Bill of the Promotion of Equality and Prevention of Unfair Discrimination Act (PEPUDA). Initially, the public was granted time for the submission of written comments until 12 May 2021, however, numerous institutions were, after specific application therefore, granted an extension to submit comments until 30 June 2021.

The premise of NEASA’s written submission, as submitted to Parliament on 21 June 2021, is the fact that it considers the amendments to be excessive, beyond the legislative scope and jurisdiction of the PEPUDA, contradictory to the values enshrined in the Constitution and impossible to enforce.

There is no listed aim in the Constitution to eliminate, prohibit or prevent fair discrimination on objective and justified criteria, however, if the obligation or duty to promote equality, possibly, to your own detriment, is now advocated and enacted by the proposed amendments, these amendments must be scrapped.

When the Bill takes effect, entities will be expected to ‘eliminate discrimination’, irrespective of whether this is fair or unfair, and the objective criteria defence will be irrelevant in assessing whether they have failed to promote equality. This ‘equality’ as per the Amendment Bill, includes equality of outcomes, which is unattainable in reality.

If they fail to discharge this onus, then the Act’s many penalties for unfair discrimination may be applied – in addition to any other sanctions imposed under other rules for failing to promote equality. Furthermore, the financial burden which will, through the effect of the amendments, be placed upon businesses and especially NGOs, to show their efforts of promotion of equality, will be enormous.

The proposed amendments to the Act will furthermore pressurise most companies and other institutions in various sectors to amend the terms on which they do business. They will now have to tread on proverbial eggshells when dealing with all persons concerned, in case they, unintentionally, by accident, or through the actions of an employee, discriminate against someone.

The ridiculous, unattainable and skewed ideological intent of these amendments, paired with the impossibility of practical implementation and adherence thereto, warrant, not only NEASA’s vehement opposition, but in truth calls for their reconsideration and ultimate abandonment.

NEASA is of the opinion that the true issues, which this Act wishes to address and remedy, cannot be done by means of the proposed amendments. The underlying inequality of our society should be addressed at the root of the problem by virtue of upskilling and proper education.

Rona Bekker is a Senior Policy Advisor at the National Employers' Association of South Africa (NEASA).