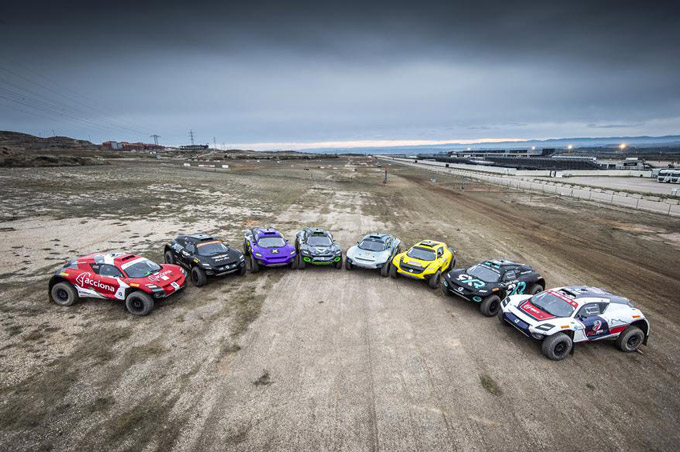 Immediately prior to the start of the spectacular new Extreme E off-road racing series, we finally know for sure which teams and drivers will be taking professional motorsports with electric SUVs to the most remote corners of the world.

With the founding of the JBXE team by former Formula 1 world champion Jenson Button, the final starting position has been awarded to a prominent personality. In total, the vehicles of nine teams went on board the St. Helena on her way across the Mediterranean to their eagerly awaited inaugural race in Saudi Arabia. Also on board were not only the tyres that had been specially developed by Continental to meet the special requirements of the new racing series, but also all of the equipment for the teams and event organisers – from the vehicles and mobile team pits to structural elements such as the podium and starting gate, all the TV and radio equipment and a vast amount of tools. In addition to this, there is also a hydrogen fuel cell for emission-free charging of vehicles.

Jenson Button himself will be taking the wheel of the ODYSSEY 21 for the JBXE team. Alongside the former Formula 1 world champion will be Continental test pilot and brand ambassador Mikaela Åhlin-Kottulinsky. In recent years, the Swedish driver has successfully competed in the Scirocco R-Cup Germany and in the rallycross discipline. In 2015, she took part in the newly established Audi Sport TT Cup. She started in the junior classification of the ADAC GT Masters in 2016 and in the Audi Sport Racing Academy in 2017, before switching to the Scandinavian Touring Car Championship in 2018, where she made history as the first and only woman ever to win races in that series.

Nico Rosberg’s Rosberg X Racing team consists of three-time world rallycross champion Johan Kristoffersson from Sweden and Molly Taylor. The 32-year-old Australian is currently the only woman to have won the title in Australia’s national rally championship. At the age of 28, she was not only the first female champion, but also the youngest champion in the history of the Australian Rally Championship.

Lewis Hamilton’s X44 team consists of Sébastien Loeb and Cristina Gutiérrez. Frenchman Sébastien Loeb made his debut in the 1999 World Rally Championship, achieved nine World Championship titles, 79 World Rally Championship wins, and racked up more than 1,600 World Championship points, making him the most successful rally driver in history. Cristina Gutiérrez has taken to the starting grid of each Dakar Rally over the past five years – and crossed the finishing line every time. In 2017, she finished her debut race in fifth place in the Rookie classification and was also the first Spanish woman to finish the Dakar Rally in the car category. In 2021, she become the second woman in the history of the Dakar Rally to win a stage.

Stéphane Sarrazin and Jamie Chadwick will be starting for the Veloce Racing team, which was co-founded by the current Formula E champion Jean-Éric Vergne. The Frenchman is an extremely versatile racing driver with experience as a Formula 1 test driver and racing experience from GT, rally and sports car races. He is one of the pioneers involved in Formula E right from the very start. British racing driver Jamie Chadwick is a development driver for Williams in Formula 1. She won the MRF Challenge Formula 2000 in 2019 and is the current holder of the W Series title.

Veloce Racing has a South African link too, as two-time South African Cross Country Series (SACCS) champion Lance Woolridge has been drafted into the team as reserve driver – making him the only South African driver involved in the series. Woolridge will be attending all of the races in his support role, contributing his valuable cross country experience to the drivers and technical crew.

Kyle LeDuc and Sara Price are driving for the team known from the IndyCar series, which is teaming up with GMC HUMMER EV in the Extreme E. American Kyle LeDuc has extraordinary off-road experience and is the current Pro-4 Champion and World Champion (COR). Since 2008, he has won seven Pro-4 championships in the Lucas Oil Offroad Racing Series (LOORRS), achieved a total of three LOORRS Challenge Cup wins, two Pro-4 World Championships, and has twice been a LOORRS Driver of the Year. He has also competed in several Trophy Truck races with great success and won the Baja 1000 in 2016.

Andretti Autosport and British racing team United Autosport have come together to form a joint team for the Extreme E. As Formula E racers right from the outset, the Americans have a lot of experience in electric motorsport and can also draw on off-road experience from the American Rallycross Championship. United Autosport has recently competed in the FIA World Endurance Championship, the European Le Mans Series and the Michelin Le Mans Cup.

Timmy Hansen and Catie Munnings will be in the cockpit of the ODYSSEY 21 for Andretti United Extreme E. Swede Timmy Hansen is the FIA’s current World Rallycross Champion. Catie Munnings is a British rally driver who, in 2016, won the FIA European Rally Championship Ladies Trophy. In 2018, she came second overall with four season wins. In 2019, she won the Ladies’ category in the Liepaja Rally.

Hispano Suiza is a Spanish automobile manufacturer. The team’s title sponsor is British energy drink manufacturer Xite Energy. Oliver Bennett and Christine Giampaoli Zonca are driving for the team. British driver Oliver Bennett made his debut in the 2016 British Rallycross Championship and has been competing in the Rallycross World Championship (WRX) since 2017. Christina Giampaoli Zonca is a rally driver with an Italian-Canary Islands heritage; she made her debut in the 2016 World Rally Championship (WRC). In the same year, she won the women’s category of the Spanish Gravel Rally Championship. She has been taking part in off-road races in the USA and Mexico since 2017, achieving third place in the T2 category in the Andalucia Rally last year.

Carlos Sainz’s team partner is the Spanish company QEV Technologies. QEV specialises in development topics in electric mobility, in particular electric drives for hypercars, buses and motorsport. QEV has had a connection to Formula E since the end of 2014 thanks to its subsidiary, Campos Racing. Just like Jenson Button, the two-time World Rally Champion, four-time vice World Champion and four-time winner of the Dakar Rally Carlos Sainz is taking to the wheel himself in the Acciona | Sainz XE team, which he co-founded. Laia Sanz will be driving together with the Spanish motorsport legend. She holds over 30 championship titles in various international trial, enduro, and cross-country competitions, is a five-time winner of the Women’s Enduro World Championship, and ten-time winner of the Dakar Rally in the Female class. In the Extreme E, the speedy Spaniard will be making her debut in automobile sport.

ABT Cupra XE is a second German team to be competing. ABT Sportsline is one of the most successful German motorsport teams, has experience in Formula E and has won titles in the Super Touring Car Cup, the DTM and the ADAC GT Masters, three of the most important German racing series in recent years. Mattias Ekström and Claudia Hürtgen will be in the cockpit of the ODYSSEY 21. Swede Mattias Ekström has been driving for ABT Sportsline in the DTM for 17 years already. He has won the driver’s title twice. Together with his own EKS team, he successfully competed in the FIA World Rallycross Championship. In 2016, he became World Champion. Since 2019, he has been working as an e-ambassador together with the motorsport-minded Spanish vehicle brand CUPRA on their electric future on the race track.

Like Mattias Ekström, Claudia Hürtgen has many years of motorsport experience under her belt. With successes in various touring and sports car series as well as appearances in several long-distance races, the German driver is one of Europe’s most successful female drivers. Hürtgen recently took to the starting line in the ADAC GT4 Germany and, for the 15th time in total, in the 24 Hours Nürburgring race.

The equal gender representation on the teams, each with one male driver and one female driver, is unique in motorsports and is part of the Extreme E racing series concept. Both drivers will take turns at the wheel, with the accumulated times being added together.

All the teams will start the races, which are to be broadcast live by ProSieben MAXX and Sky Deutschland, with identical technical equipment: an SUV called ODYSSEY 21 and 37-inch CrossContact Extreme E racing tyres specially developed by technology corporation Continental to put its 550 hp safely onto the track under all conditions.

Overview of race dates for 2021