Is Harley-Davidson Heading for a Crash? 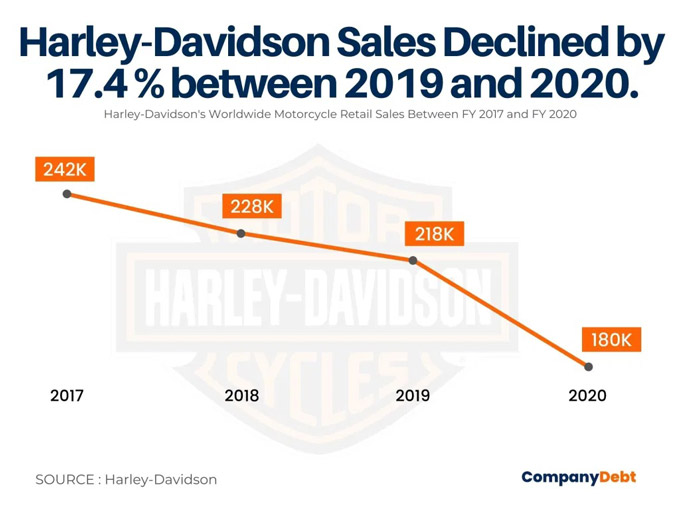 Could the Legendary Motorcycle Manufacturer be in Trouble?

Company Debt published exclusive insights about the motorcycle industry and the challenging road ahead for Harley-Davidson.

Will the World's most famous motorcycle manufacturer have to go electric to survive? Will it be saved by millenials? Is it heading for a crash?

Between 1945 and 1970, the number of registered motorcycles in the US jumped from 198,000 to 2.8 million. During that time, Harley-Davidson rose to become America’s most iconic motorcycle company and perhaps the most prominent counter-cultural brand in the world.

However, in recent years, the wheels have started to come off for a brand that has struggled to capture the imagination of younger consumers.

While it is still the leading motorcycle manufacturer in the US, it is losing ground in other markets around the world, and of course, the COVID-19 pandemic certainly hasn’t helped.

With that in mind, could this be Harley-Davidson’s last ride or will it keep on rolling for many more years to come?

Falling Retail Sales Around the World

One of the first challenges Harley-Davidson has to overcome if it is to thrive long into the future is the pattern of decreasing retail sales around the world.

That slump has been most severe in markets such as Latin America, where retail sales fell by around 38% in a single year. A dip in sales, contributed to by the COVID-19 pandemic, was also seen in the US, with a decline of 17%. These freefalling sales figures have had an inevitable impact on revenue, which plunged from $6.2bn in 2014 to just over £4bn in 2020.

Harley’s Brand Equity is on the Slide

Harley-Davidson has the highest market share of any motorcycle brand in the US based on unit sales. As of March 2020, it accounted for around 30% of all motorcycle sales in the country. Next on the list was Honda, with a comparatively small 21.4% of the market and Yamaha with a 12.2% share.

While Harley may be the top motorcycle manufacturer in the United States by market share, the US represents only the 11th largest motorcycle market in the world. India is by far and away the largest, yet this is a market that Harley-Davidson has recently decided to pull out of entirely.

However, a diminishing global market share is not the only long-term problem that Harley-Davidson faces. Its brand is also less powerful than it was a decade ago. In 2009, Interbrand ranked Harley-Davidson as the 73rd-best brand in the world. Today, it is ranked by the same global marketing agency as the 99th most powerful brand. That fall is largely due to its failure to capture the attention of a younger demographic.

In 1985, the year before Harley went public, the median motorcycle owner in the US was 27 according to the Bureau of Transportation Statistics. By 2018, that median age had risen to 50. The average age of Harley-Davidson riders has mirrored that increase. In 2008, the last year that it openly publicised this information, the average age of a Harley Davidson rider in the US was 48 years old. This is a big problem for Harley and one that is proving very difficult and expensive to overcome.

The core customer for Harley-Davidson is the well-heeled baby boomer. Unfortunately, these customers are getting older and are nearing the end of their biking years. The millennials who are filling that void have a completely different view of what they want from a motorcycle.

While older buyers want to buy motorbikes for hobby or recreation, younger consumers are much more interested in ease of transportation. That’s something they can get for a lot less than the typical $25,000-$30,000 cost of a Harley-Davidson. Unless there’s a generational shift among younger riders, then heavyweight bikes such as the Harley will continue to be dependent on an ageing demographic.

Concerns over vehicular emissions, increasing consumer awareness about air pollution and rising investment in EV charging infrastructure are all expected to boost the prospects of electric bikes. This is a market that was worth $30bn in 2019 and is expected to grow by more than 4% a year between 2020 and 2026.

Harley has already initiated an ambitious plan to lure 2 million younger riders to the brand over the next 10 years. One step the company is taking to set up a network of riding schools around the country. The other has been the release of an electric motorcycle called the ‘LiveWire’. Although the LiveWire doesn’t have big sales yet, it is attracting new customers to the brand that might not have considered Harley-Davidson before.

Can Harley-Davidson Turn a Corner?

Although investors were originally buoyed by Harley’s ambitious turnaround plan, it has since hit a roadblock, with shares in the company falling by more than 20% after it reported a loss for Q4 of 2020. Revenues fell by 39% compared with a year earlier and retail sales in the US fell for the 16th straight quarter. That’s despite the fact that motorcycle sales as a whole in the US have risen on the back of increasing demand for socially distanced outdoor activities.

Clearly, there’s still plenty of work for Harley Davidson to do and a turnaround in the company’s fortunes will take longer than the iconic brand’s investors, staff and customers might have hoped. However, the brand still has enormous value and a commitment to electric under a relatively new management team could help the company attract younger riders and secure the long-term future of the company.