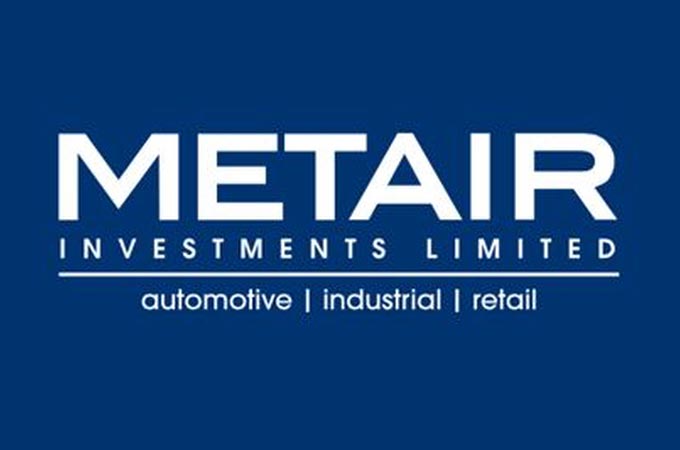 Metair, a leading international manufacturer, distributor and retailer of automotive components and energy storage solutions, today announced a resilient performance for the 2020 financial year characterised by unprecedented uncertainty and significant disruption as a result of COVID-19 lockdowns.

Group revenue was 9% lower at R10.3 billion on the back of the decline in vehicle demand in the first half. Group operating profit came in 45% lower at R561 million, reflecting the squeeze on margins and under-recovery of fixed costs in production. Group EBITDA (including associates and excluding impairments) of R891 million was achieved and headline earnings per share ended at 148 cents for the year, compared with the loss per share of 56 cents in the first half, demonstrating the second half recovery.

Riaz Haffejee, Metair’s newly appointed CEO, commented: “The Group successfully implemented our COVID-19 response strategy, limiting the impact of disruptions on our people, operations and financial position, and securing a U-shaped recovery in line with our Vision 2022. The second half performance was particularly pleasing as the Group demonstrated the required agility to respond to the rapid recovery in demand.

The Automotive Components vertical which derives most of its revenue from Original Equipment Manufacturers (OEMs) within South Africa was directly impacted by the national lockdown and subsequent phased reopening. South African OEM production for the year dropped 32% despite volumes normalising mid-fourth quarter. The weaker Rand during the period offset the operational volume decline, returning revenue of R4.9 billion, a decrease of just 12%. Despite the profit erosion from manufacturing inefficiencies and limited volumes, the vertical recovered from a loss in the first half to deliver operating profit of R88 million. The outlook for the vertical is positive with OEM activity anticipated to recover to near FY19 levels however, global supply chain challenges remain a risk to stable production.

The Energy Storage vertical contribution was supported by exceptional performances from Mutlu Akü (Turkey) and Rombat (Romania) which both achieved improved local operating profit. Revenue for this vertical declined 6% to R6.4 billion and operating profit of R588 million was achieved. In Turkey, local aftermarket and OEM demand remained strong but export volumes were negatively impacted by border closures and logistics constraints. In Romania, OEM, aftermarket and export volumes largely rebounded to FY19 levels due to sustained demand experienced from May. In South Africa, post-lockdown aftermarket demand was strong but OEM volumes remained under pressure and industrial demand was particularly weak, negatively impacting First National Battery’s contribution. With the ability to serve and reach export customers as economies open up, the outlook for energy storage is encouraging. Automotive battery sales volumes are expected to be slightly higher than FY19 levels, aftermarket and OEM volumes should be sustained and exports should improve.

The working capital cycle was well controlled resulting in strong cash generation and R687 million of free cash flow during the period. The focus on cash management during the year resulted in R1.6 billion in cash and cash equivalents at year end. Net debt levels were prudently managed and reduced by R513 million to R805 million. Capex spend for the year was well controlled and totalled R247 million. Unutilised and available finance facilities totalled R2.3 billion when translating foreign currency facilities into the rand equivalent.

“The second half recovery and improved market visibility supported the Board’s decision to resume dividends. Our financial position remains strong and we will continue to drive effective project management and operating efficiencies to maintain our current base as we enter an intensive capital expenditure cycle to invest in future returns,” commented, Sjoerd Douwenga, Metair’s CFO.

A total of R1.3 billion in capex has been allocated for 2021. Majority of the committed capex relates to investment in facilities, tooling and machinery to support new projects that can deliver up to R35 billion in revenue over the expected 10-year model lifecycle with production planned to start in 2022. The largest approved project relates to new Ford contracts. This project involves major investments in greenfield facilities that will create around 3300 new employment opportunities and contribute to economic and social upliftment in the communities of Stanger, northern KwaZulu Natal and Silverton, Gauteng.

From an Energy Storage perspective, investments will be made towards capacity and efficiency enhancements at Mutlu Akü and expansion of Metair’s automotive battery product range. Following completion of the lithium-ion production facility in Romania at the end of 2019, the commissioning of the facility and commencement of lithium-ion cell production is planned for the second half of the current financial year. This facility is of strategic importance as an incubator to build Metair’s intellectual property in the development of bespoke chemistries, technologies and manufacturing facilities, and in positioning Metair as a potential development partner for OEMs in pursuit of their own technological advancement.

“We are well positioned to secure increased share in the significant local automotive industry growth. This should be supported by our achievement of a Level 1 Group consolidated B-BBEE score and positive movements in other sustainability metrics as part of our commitment to stewardship.

“Among other priorities for the current year, ensuring a smooth leadership transition at all levels and supporting flawless launches of new models and facelifts are key. The Board remains committed to evaluate the best way forward to unlock value for stakeholders with the previously announced strategic review aimed for completion in the second half of this year” concluded Haffejee.